Here I document just one egregious episode in the administration’s long effort to rid itself of me. It is nothing short of a sexist smear. President Neal Plantinga, ignoring measurable results of my performance, drew on an old formula for ruining a woman’s career: accuse her of being hysterical. I had been called to a meeting with him and VP Duane Kelderman. According to him I was asked a straightforward question:

“What followed, without pause, was a tirade—a stream of accusations
Read more »
Posted by Ruth A. Tucker at 5:49 PM

When it comes to domestic violence, there are many code words that are employed to lesson the crime. When Judge Carol Irons (while in her chambers at the Grand Rapids Kent County Courthouse) was gunned down and killed by her policeman husband, his supporters all claimed that she had "provoked him." That is exactly how my husband excused his domestic violence. And such violence is often propped up by the term "male headship." In my latest book I talk about Judge Irons, male headship, and my own story of terrorism, threats, and violence at the hands of my ex-husband, an ordained minister. Code words that foster sex discrimination take many forms, including the often-hidden crime of domestic violence. Check out my book on ruthtucker.com
Posted by Ruth A. Tucker at 8:06 AM

THE MEN AND THE GIRLS

Many years ago when I was teaching at a small college, I picked up a basketball schedule and started down the road of gender protest. On the front side of this wallet-sized schedule was "Men's Basketball" and on the back side was "Girl's Basketball."

Now, some might say that back in the early 1980s, I should have been happy just to see the GIRLS listed at all. But I was determined then and am determined now to protest wherever I can the code words used against women.

THE DR. and the MRS.

Like the men and girls lists, I have often seen (and been on) the Dr. and Mrs. lists. Throughout my professional career there have been countless times that I have been on lists with other speakers or teachers or contributors, and on many occasions I have been listed as Mrs. Ruth Tucker (even during those 17 years that I was single) while my male colleagues were listed as Dr. No big deal, I suppose. But it certainly is evidence of gender coding.

HOUSEWIFE: See this site where I speak of words like hussy, hag, nag, scold, shrew and many more.


I speak of gender code words elsewhere--especially as the matter relates to my Calvin Seminary experience.

Gender code words are not generally obvious like women are bitches. Rather, they show an underlying gender bias. For example, when I was asked by the Calvin Seminary Board President what issues should be mediated, I responded that the mediators should determine whether I was the most deficient professor and whether the process was fair and honest—a very short and straightforward statement. One of the Board officers, however, accused me of being “melodramatic” in raising the issues. It was a gender put-down. Women are deemed hysterical. They are out of control. They’re melodramatic—even when they are asking straightforward questions—in a written document, no less.

Typical code words for women, as identified in gender studies, are ones like domineering, bossy, headstrong, overbearing. The same characteristics in a man are typically described by words such as strong, in charge, confident, self-assured.
There are code words that are evident in my student and faculty evaluations—and many more such comments have been made to me personally. Examples are: “reactive and combative,” “quite paranoid,” “excessively conformist.”

Exhibit A of Code Words

One of the most obvious examples of the use of code words came from a man who wrote to Neal Plantinga, the seminary president, about me as a faculty advisor at the 2005 Christian Reformed Church Synod. I had spoken on one occasion in a committee meeting, giving what I would describe as a well-reasoned perspective that was not held by all others in the room.

Now, anyone who has ever attended Synod of the CRC knows that men voice very strong opinions (and are sometimes embroiled in angry diatribes) on the floor of Synod (where the Press can observe). But this man was faulting me as a woman for speaking up behind closed doors in a committee meeting because I “reflected negatively . . . on the cause of women in leadership.”

Neal used his letter as evidence against me (apparently not recognizing the code words) in submitting materials to the Board Ad Hoc Committee that reviewed my case.

Though I do not know this man nor do I ever recall meeting him, he begins the letter with simply “Ruth,”. He refers to Neal (to whom he reported my behavior) twice as “Dr. Plantinga.” [Actually this is, as stated above, a very common gender faux pas. Men are listed as “Dr.” Women are listed as “Mrs.” or just first name.]

This male writer than goes on to say: “When I first met you I noticed a kind of contrariness. . . .” You can’t invent a better example of a code word than contrariness! How well we all remember, “Mary, Mary, quite contrary. . . .”

He goes on to say: “you appear a little stand-offish and judgmental. . . . You came off making judgments. . . . You spoke in judgments, and with what came off as arrogance.”

I simply cannot imagine a male colleague being treated this way. The letter was filled with gender discriminatory code words. Yet, Neal used it as evidence against me.

Here is one of those Internet stories--fascinating--just hope it's true! It's from this site: http://badgerbag.typepad.com/badgerbag/2006/08/the_womens_arqu.html

The garrison in Haarlem now numbered about 1000 delvers or pioneers and 3000 fighting men, while there was a strong corps of 300 women armed with sword, musket, and dagger. The chief of this corps was a widow of noble family, a woman honoured by all who knew her. She was about forty-seven years of age when, at the head of her little band, she fought in many of the most fiercely contested actions of the siege, both within and without the walls. . . .

1572 In defence of the city during a siege of Haarlem by Spanish troops, which lasted from December 1572 to 1573, Kenau Simonsdochter Hasselaer (1526–1588) supplied the Dutch forces with wood. She owned a wood company at Haarlem. Myth says she led a force of women defending the city and ever since "kenau" has been a Dutch expression for a harsh woman. . . .

Kenau Simonsdochter Hasselaer (1526-1588) was the daughter of the Mayor of Haarlem, Netherlands. When the city was besieged by the Spanish, she allegedly led 300 women in defence of the city. After the city was captured, she fled but returned years later. She died at the hands of pirates in 1588. . . .

Her name lives on in colloquial Dutch. Today, kenau is the Dutch word for "a bossy woman who is thoroughly disliked".

Note how we move from "a woman honored by all who knew her" to "a bossy woman who is thoroughly disliked". I offer this as evidence against visions of feminism as a story of evolutionary progress. Again, sadly, I think what I am in is a tiny bubble of human rights for certain extremely privileged women - and that bubble is quite fragile.

Oh - it gets better and better - "In 1568, two sisters, Amaron and Kenau Hasselaar, led a battalion of 300 women who fought on the walls and outside the gates to defend the Dutch city of Haarlem against a Spanish invasion." 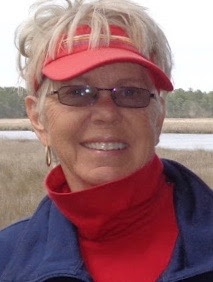 Fired at 57: My Fight for Justice in Christian Academia 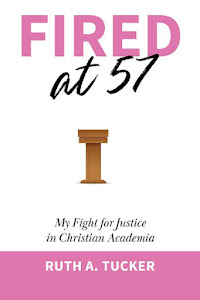 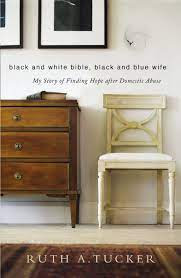 I was terrorized and beaten by my minister ex-husband

Ruth A. Tucker
I'm a retired teacher, writer, conference speaker, current gardener and creator of folk art that I sell and show people how to make at our shop, Carlton Gardens. Husband John Worst is Professor of Music emeritus at Calvin College turned carpenter. We love the outdoors and living on the Grand River, and we delight in our grandkids, Kayla (and husband Ariel), Mitchell, Ashley, and Zachary.

I began teaching at Calvin Theological Seminary in 2000--the first full-time woman professor in the school's 125-year history. In 2003, less than 3 months after Cornelius Plantinga, Jr. was installed as the new president, I was, without warning, removed from tenure track and given a terminal appointment. I have repeatedly asked that all the evidence be opened only to be blocked by a dishonest cover-up. When independent mediators were retained by the seminary board in 2005, they called for "retroactive pay to 2003," among other things. That report was buried. I finished my second terminal appointment on August 31, 2006, and shortly thereafter published my story here.